The name finding service for businesses

Experienced naming pros develop first-rate naming proposals. Select your rate, complete a questionnaire, and the FlyingNames team will get to work.

The smart naming tool for business founders and startups

The intelligent name finding assistant will provide you with step-by-step guidance and help you find a great name for your business. Utterly simple and simply clever.

Name finding solutions for anyone who wants to be creative

Find your favorite name generators and specify the kind of name suggestions you want. Refine all settings to reflect your tastes precisely.

Gather inspiration from foreign languages ​​and cultures! The Languages tool can find translations for your keywords in up to 91 languages with a single click. Try out which of your ideas sound especially original or beautiful in another language. Who knows - maybe you'll find an unexpected, inspiring word, or even a first name idea?

Be inspired by foreign languages

The Languages tool will quickly expand your Word Depot with numerous foreign terms that fit your project's topic. You will find original translations for your keywords in familiar languages ​​such as Spanish, Italian or French.

If you like a more exotic approach: No Problem! Translations to uncommon languages ​​such as Finnish, Latin and Esperanto are also available. Our insider tip: Swahili words sound original, beautiful and often evoke positive associations. In addition, having an exotic name is always good when one's product or company name is to be explained in a brochure or on the website.

The following languages are available:

The following inspiring translations are examples for results from the translation tool, which you can find with just one click for each word:

You can test the translation tool right here on the page and perform up to five queries.

Enter a single word and have it translated into up to 21 languages with just one click. 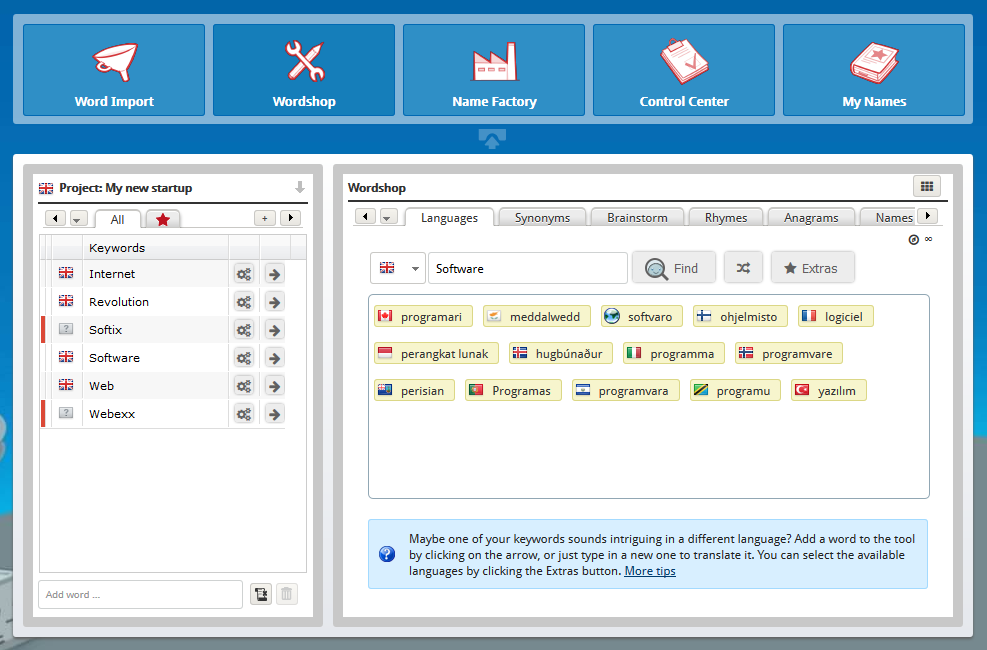 Go to the Languages tool in the Wordshop right now! If you don't have a NameRobot account yet, simply register and start looking for a name!